This shop uses cookies - both for technical reasons and for improving your shopping experience. If you continue to use the shop, you consent to using of cookies.

In 2000 English fire fighter Barry Smith, a former helicopter engineer, decided to build his son something a bit different from parts salvaged from a skip.

Little did he dream it would blossom into a global business. 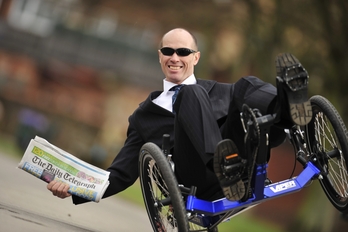 But it did  because those first efforts produced a three-wheeled vehicle resembling a cross between a BMX and go-kart, which created quite a stir when he and son Dean took it for a spin.

It was fast, it was easy to ride, it was fun and Barry was hooked.

Thus was born the KMX brand which has since been described as a cool fusion of go-kart,

BMX and mountain bike with a remarkable stability due to its low centre of gravity.

After two years of fine tuning, Barry and wife Yvonne launched KMX in 2002 with a trike for children, the K Class.

Whether someone wants to race on the flat, cycle up and down mountains, do stunts, ride to work in the open air or leisurely tour the countryside, theres now a KMX designed to do it.

Today, KMXs are being sold in the UK, Ireland, on the European continent and in America, Australia, Japan and other parts of Asia.

More importantly, from Barry and Yvonnes perspective, KMX are building an enviable reputation for outstanding performance and customer care.

In 2003 they won an award for Best New Product  at the International Cycle Show in London and more recently, an accolade for being an up-and-coming UK exporter.

All KMX trikes are manufactured with 3 basic qualities in mind: Value for Money, Quality and most of all  FUN!